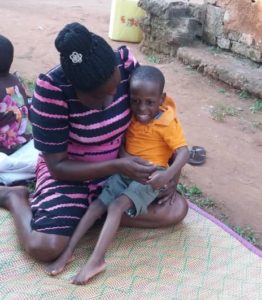 One of the areas of focus of the Joanne Foundation is the care of
children with a disability. Not long ago the Foundation decided to take
in Allon in our program. Allon is a five-year-old boy with a serious
physical disability. His father left the family right after Allon’s
birth stating that handicapped children did not occur in his family so
Allon could never be his child. His mother took care of Allon for a
couple of months but then suddenly left leaving him behind with her
mother. Allon’s grandmother is a loving and well meaning person trying
her best to take care of Allon who can’t walk, sit, talk…).

Allon’s grandmother has no income and the Joanne Foundation would very
much like to help her in taking care of Allon.

We would also like to know if Allon is able to sit and eat without help
after some sort of therapy and training. This would enable him to join
Joanne’s Children Corner and play with other children, make music and
sing with them. Jane agreed to take some pictures sothat our friend
Emma, a physiotherapist, can analyse his movements and make
instructionfilms sothat Jane and Allon’s grandmother can practise with
Allon.

Hopefully there will be enough progress after a while which will benefit
his grandmother and himself. 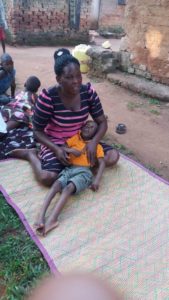