Since 2006 Joanne had travelled to Uganda a number of times to do volunteerwork. She found out that much could be improved about the situation of disadvantaged children using relatively few means. She got to know many people who she took to her heart. She stimulated children to go to school and she paid the schoolfees for a number of children whose parents couldn’t afford to do so. In December 2008 Joanne was murdered, her beautiful life was ended prematurely, a life filled with ideals, plans and dreams. She was 27 years old, in this short timespan she has meant a lot to many people and set so much in motion.

HOW IT ALL STARTED

Joanne’s parents and a few friends continued her dream under the name “Joanne’s children in Uganda”. Because of the fact that the activities expanded the Joanne Foundation was created in 2015. The Foundation focuses on the community of Ndegeya, a small and very poor village north of Masaka. The Joanne Foundation works closely with the village elders and supports local initiatives to improve the living conditions of the poor people, among other things through healthprograms and water- and sanitationprograms. Furthermore, attention is given to education and language stimulation for the elderly people and for children with a handicap.

You may remember the story of Owen: a boy with Down syndrome, who came our way in 2014. Apollo found him in a shed. His mother was ashamed of him, because children with disabilities in Uganda are [...]

One of the priorities of the Joanne Foundation is more self-sufficiency for the Ndegeya community. Together with the village elders and our team in Uganda we try to stimulate activities that generate extra income in the long run. Because [...]

Millions of vaccins have been produced till now and fortunately part of those vaccins have been sent to Uganda. The Ugandan government decided to vaccinate the healthcare workers first. Our nurses Kakande and Michael are very glad (as we [...]

Masks with the Achterhoek flag

Through the radio program called " Gelderland helpt " we received 50 masks from De Achterhoekse Winkel for our project in Uganda. On the masks is printed the Achterhoek county flag. 50 people in the Ndegeya community now wear [...] 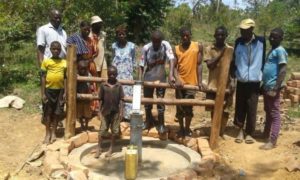 The Joanne Foundation aims at seven areas of focus. On this page we tell you the reason for our choice and what we hope to achieve with these activities. 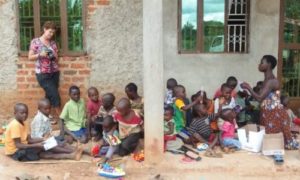 The Joanne Foundation is involved in various projects. On this page you will find more information and we are happy to show you examples of projects we have taken up together with the community.